by Taylor McGraa | 17 hours ago

Last month Brexit happened, and the UK voted to leave the European Union.

Chaos ensued: the value of sterling plummeted, hate crime rose across the country, and people began to the worry that the facts and figures proposed by the leave and remain campaigns had been fabricated from the start. Although 51.9% of the population voted out, it still left a huge majority of the country feeling deflated and at a loss.

To make matters worse, days after the result a number of reports revealed that thousands of leave voters were regretting their decision – it had become apparent that the promises made by the campaign to vote out of the EU were not entirely concrete. We had been lied to.

In light of this, a twenty-six year old man from Norwhich, Marcus J Ball, is heading #BrexitJustice – a radical campaign which aims to hold politicians accountable for their actions, potentially reversing the effects of the EU referendum.

In order to achieve this goal Marcus has taken to Crowdfunder asking the public to work together and help raise a minimum of £100k. With this money he wants to hire a team of solicitors, barristers and research assistants, all of whom will help to challenge and prosecute political leaders that may have lied or misled the public during the run-up to the EU vote.

“On the night of the result I just couldn’t sleep,” he tells Konbini, “I definitely thought that we were going to remain.”

Like many remain voters, Marcus’s anger was first directed towards those who voted to leave the EU. “But then I realised I shouldn’t be angry with them,” he explains, “because we were all lied to.” 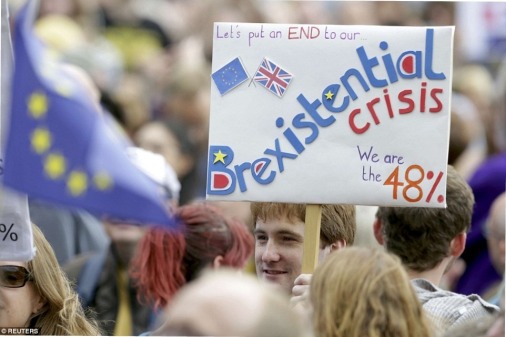 In a video for the #BrexitJustice Crowdfunder, the two objectives of the movement are explained. The first is to punish as many political leaders as possible for their actions regarding the EU vote, charging the likes of Michael Gove, Boris Johnson and Nigel Farage. Charges will include misconduct in public office, incitement to racial hatred, and even fraud. The second objective, Marcus says, is an attempt to reverse any damage caused by political leaders, possibly by funding a judicial review.

In less than nineteen days the campaign has hit its target of raising an amazing £100k, with an incredible 3743 people financially backing it to this date. Now, the team are working towards a stretch target of £125k, trying to raise as much awareness of the cause as possible.

#BrexitJustice has already accumulated five qualified law professionals who have actively expressed interest in working towards the cause. They also have a barrister who is helping to guide their actions. “My next job is to get all the lawyers into one room,” Marcus says, “there will be a meeting in London in the next three to four days.” The campaign is moving fast – both exciting, and inspiring to watch.

It’s incredible to see just how far #BrexitJustice has come, purely through the power of the internet. “I’m 26 so my first instinct was to go online,” Marcus tells us. “It’s so much easier for our generation to do this kind of thing.”

“One of the great powers that PMs have is wealth, and the ability to have law on their side,” he continues, “but crowd-funders and the internet change that dynamic completely – we are far more powerful now.”

Marcus is right – with the influence of social media and online journalism helping to power grass-root campaigns, it’s definitely an exciting time to be involved with politics. #BrexitJustice is just one example of how we can work together to bring power back to the people, and potentially change the face of politics for good. “I’d really like it to be a uniting force between leave and remain voters who are unhappy with the lies that they’ve been fed,” Marcus implores, “but it’s gonna take some time.”

The team behind the campaign hopes that in proving that leave politicians have lied to the public, it will be easier to call for a second referendum or annul the vote completely. “If we can prosecute them and step forward,” Marcus continues, “people will realise that they have been lied to.”

It’s not a quick fix and it’s not going to be easy, but if the #BrexitJustice campaign proves successful, it has the potential to inspire nations across the globe to stand up to their government, and reclaim power in a way that has never happened before.  “I also hope that in seeking justice against these people now,” Marcus concludes, “we can discourage further action of this sort from other political leaders in the near future.”