New @guardian story up on what’s happening in Britain…but this has big implications for Trump-Russia investigation too. This was @Nigel_Farage‘s campaign. Friend of Bannon. Ally of Trump. Whose funder we now learn had covert links to Russia..

This is the crux of it. Ambassador Yakovenko oversaw the presentation of a multi-billion $ gold deal. And we know that 12 days after referendum, the deal took place. Sound familiar? Same tactics as the Rosneft deal…with Carter Page played here by @Arron_banks 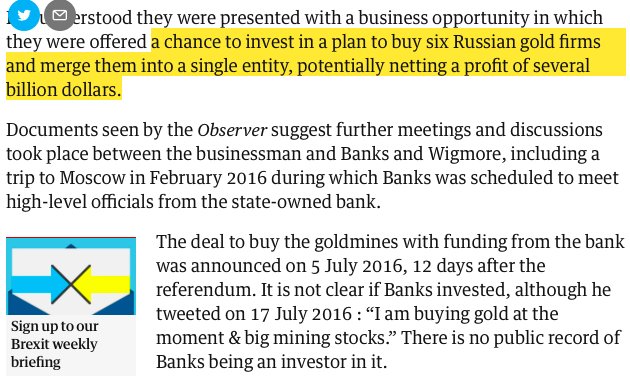 This story as as significant to Trump-Russia as it is to Brexit. And key figure is @Amb_Yakovenko – the Russian ambassador to London who’s named in Mueller indictment of George Papodopoulos. He’s the one who issued invites. He’s the one who oversaw the offer of a $$$ gold deal…

Dear America, you need to get to grips with story dominating UK press. Today, we reveal how Russian ambassador groomed the funders of Brexit campaign with offer of sweetheart deal. That’s the Brexit campaign led by Bannon friend & Trump ally @Nigel_Farage

My @guardian column on the #ArronBanks story h/t to ⁦@carolecadwalla⁩

“At first she accused The Observer of hacking her archive and stealing the email… but by late afternoon on Saturday she had entered into a discussion about cooperating with The Guardian/The Observer if they agreed to hold the story until Monday.”

I did. I would LOVE for MEPs to question @nigel_farage. Because he won’t answer mine. @Arron_banks visiting @RussianEmbassy is one small part of the story. The bigger play is Britain’s central role in the Trump-Russia nexus. And, how, slap bang, in the middle of it all..is Farage

David Carroll
🦅Verified account @profcarroll
I’ll add that @carolecadwalla implored MEPs in @EUparliament to scrutinize one of their own now that MPs are “calling the cops” on the Bad Boys of Brexit as Nigel Farage’s LeaveEU campaign imbroglio intensifies. https://www.theguardian.com/politics/2018/jun/10/arron-banks-mps-call-for-police-investigate-russia-links …
Show this thread
39 replies 324 retweets 593 likes 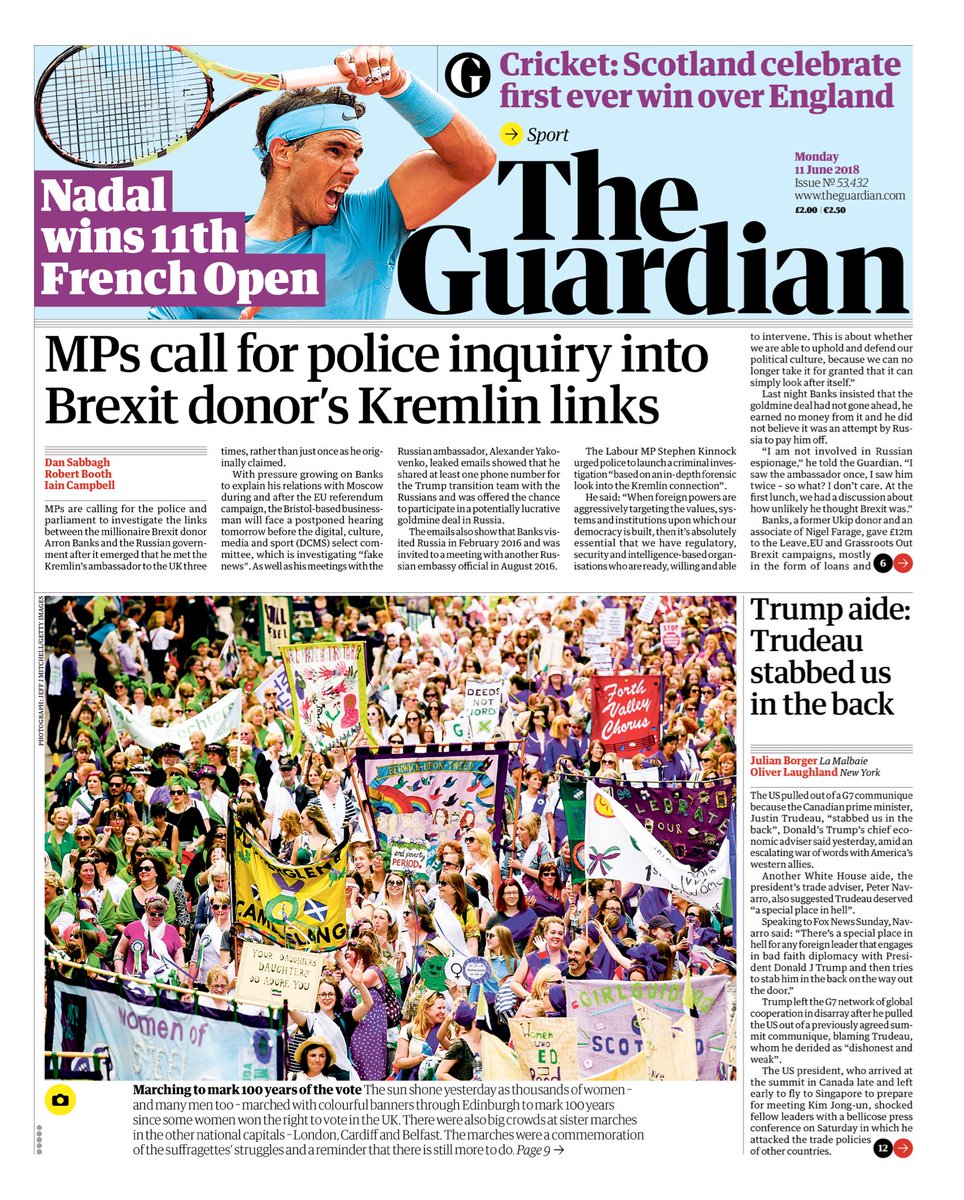 Yoo-hoo, @Arron_banks! Have you had time to check your ‘diary and office computer’ yet? You’ve now had 53 hours to get back to us…

Peter JukesVerified account @peterjukes
Replying to @Arron_banks @carolecadwalla
And while you’re here Arron, can you answer this about the ‘Gold Play’? You went to Russia to talk to the stake holding bank in Feb 16. The bank deal went ahead by July. Did you have a stake? Is it through a certain holding company in Cyprus?
56 replies 888 retweets 2,057 likes

Arron knows this isn’t what happened with our story. But in typical Putin/Trump misinformation mode, he tries to change the subject.

…by which I mean, I could really have used some learned advice on how to handle a problem like @Arron_banks. Still, good news is that he lied to us & shown bad faith so @AnthonyJulius6 at @Mishcon_de_Reya is going to find it much harder to write those defamation letters now..

My god. They will have to teach this one at journalism schools in years to come. What a toxic, twisted mess. So, everything given to @thesundaytimes came directly from @Arron_banks?!? What. The. Actual. Fuck?

PLOT TWIST! I now hear that it was @Arron_banks who gave @sundaytimes the story!!! I emailed him at 11.58am on Friday carefully detailing all the allegations, per good journalistic practice. He claimed he hadn’t seen the email & needed more time. Meanwhile…

not ‘Times investigation’. Oakeshott went to S Times with her email stash when foundout (b/c invitations sent to key figures to respond to allegations – standard legal practice) that @carolecadwalla @peterjukes were due to report emails story in Observer (seen via another source) 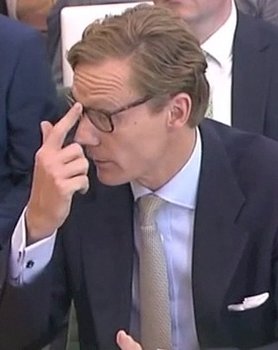 All of the above quote is a download from Carole Cadwalladr’s TWITTER Feed 0210hrs Monday 11-Jun-2018. I have altered the colour of comments regarding Nigel Farage to RED.
This I assure you is just the tip of the iceberg, which I have refrained from giving details of, nor have I shown where much of the money seems to have gone and apparent properties purchased for 2 main reasons: Firstly I have waited for the media with its backup of lawyers to indemnify my publication of facts – Secondly as I did not wish to fall fould of the laws pwrtaining to reportage of ongoing Court Cases as I felt there was a risk of prejudicing a Court case.
I understand Carole Cadwalladr has witheld publication of the eMails etc for many months on similar grounds, seemingly publishing the material as Isabel Oakeshott was publishing to seemingly seek to cover her apparent collusion with Banks, Farage & Wigmore and doubtless others in betrayal of Britain and the principles of democracy aided indirectly and possibly directly with the Russian authorities and intelligence services.
There is clearly a great deal more to come – however much of the time the Meeja is obsessed with gossip, Slebs and the simple story with peurile soap opera style pandering to the lowest public interest in a rush to the gutter.
Keep checking back for more revalations and archived material on my various sites see:
CLICK HERE

With an avg. 1.2M voters per MEP & Britain with 16% of EU GDP and 13% of the EU’s population yet  having only 8% (if united) say whilst holding less than 3% of the various offices within the EU Do note The EUropean Parliament has no ability to make policy and has a Commission of unelected bureaucrats, thus clearly the EU is not even a pretence of being a democracy!

Do note that many senior apparatchicks and even elected politicians speak openly of the ‘Post Democratic era’ with no sense of shame or irony and in complete contempt of the so called electorate – yet The EU & many of its vassal States/Regions are all too willing to slaughter people in Sovereign States, to impose The EU’s chosen brand of democracy on them!Now as President Junker announced in his ‘State of the union’ speech 2017 the aim is to create an EU military force and centralise ever more of the decision making and control!