Theresa May today delivers an extraordinary appeal to wavering Labour supporters to switch to the Conservatives as she attempts to portray her party as the only option for moderate and patriotic voters.

Writing exclusively in today’s Observer the prime minister says that if people who have previously backed Labour look again at her government’s programme, including pledges to increase house building and manage markets where necessary, they will find that it is not driven by ideology, but by beliefs and values that the vast majority could support.

Seeking to reclaim the One Nation mantle for the Tories, May writes: “I want voters who may previously have thought of themselves as Labour supporters to look at my government afresh. They will find a decent, moderate and patriotic programme that is worthy of their support.”

Labour voters should look afresh at the Conservatives

She argues that in an era in which traditional political allegiances count for less, the Tories now have a responsibility “on our shoulders” to offer a home to millions of former Labour voters who are unhappy with the party’s move left under Jeremy Corbyn. May’s pitch for the centre ground will enrage many Labour supporters who see her as a supporter of eight years of Tory austerity and the architect of the hostile environment for immigrants.

It comes amid rumours in Westminster that disgruntled groups of Labour, Tory and Liberal Democrat MPs could try to form a new party on the centre ground to appeal to voters who regard the Tories as too pro-Brexit and right wing, and dislike the leftwing agenda of Corbyn.

Adapting Labour’s slogan at the last general election (“For the many not the few”), May says: “This presents an opportunity Conservatives must seize – to be a party not for the few, not even for the many, but for everyone in our country who works hard and plays by the rules.” 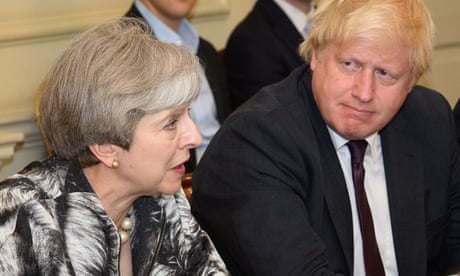 Voters strongly back ‘trustworthy’ May as Johnson’s leadership bid backfires

After a party conference in which she announced plans to free councils from borrowing rules that have prevented them building more homes, May now embarks on a crucial fortnight in her Brexit negotiations with the EU. Senior government sources close to May said she is, however, determined to start looking beyond Brexit, to devise a domestic programme by which she will be remembered after she leaves Downing Street.

On Saturday Jean-Claude Juncker, the head of the European Commission, said the chances of a Brexit deal had risen in the last few days, and it could be finalised next month. However, the EU is expected to publish proposals this week that fall short of the frictionless trade deal that May envisaged under her Chequers plan.

May’s One Nation pitch is bound to be ridiculed by Labour as a desperate tactic by the leader of a party in which rightwing ideologues are in control and driving Brexit policy. Reacting to her initial pitch for centre ground voters in her conference speech last Wednesday, former Labour home secretary David Blunkett said May was clearly laying a trap for his party. 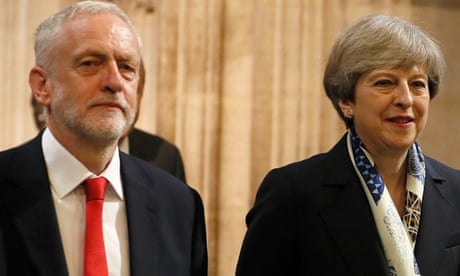 Revealed: Theresa May’s secret bid to get Labour to back Brexit deal

“This is a well tried tactic, attempting to achieve two things at the same time,” Blunkett said. “The first is to appear to move sufficiently on to Labour territory to seem reasonable and moderate while at the same time trying to push Labour further from the mainstream. We must avoid this trap, because it is a trap.

“We need to be much more sure-footed in demonstrating where the Conservatives have stolen our clothes. And we need to reassure people that we won’t allow these blatant Conservative tactics to push Labour into adopting policies even more extreme and outside the mainstream.”

In her article May returns to many of themes she outlined in July 2016 when she became prime minister. She reiterates that the end of austerity “is in sight” and says while in the past “economic change has left some communities behind,” this time Conservative policies will deliver benefits for “every town and city”. 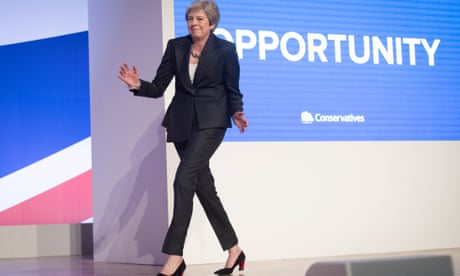 May banks on Brexit to keep her in place until March

Deborah Mattinson, Gordon Brown’s former pollster and founder of the polling company Britain Thinks, said May was making a “direct appeal to the 80% of British people who want the country to come together.”

She said: “Persuading these voters to consider the Tories is not an easy task. In decades of voter research, the Tory party ‘brand’ (unlike Labour’s) has barely changed. Posh and professional, it falls short on empathy and fails to pass the test of being ‘the party for working-class people’, or, crucially, ‘the party for me’.”

She added: “Our recent studies explore how the Conservatives might widen their appeal. They find that, while moving to the right has a negative impact (-18%), moving to the centre shifts the dial positively with more than 9% saying they would be more likely to vote for a centrist Tory party.”

Responding to May’s Observer op-ed, Labour party chair Ian Lavery said: “With the government about to impose some of their most brutal cuts yet on working people, Theresa May’s claim that austerity is over is a con.

“The Tories have spent their entire time in power running down our schools, local services and NHS, while gifting huge tax breaks to big business. The prime minister is clearly spooked, so is resorting to desperate pleas in an attempt revive her failing administration. The British public won’t be fooled.”