This is a copy of the blog post on the Bruges Group website,  which has very quickly been taken down. I am hosting it here simply for visibility. I make no claims about its accuracy.

There is no doubt about the veracity of this account since documents have been seen.

On Monday July 9th 2018, several leading French, German and Dutch senior managers were called by EU officials to an urgent meeting.
The meeting was said to be private and those present were informed that Prime Minister May and Chancellor Merkel had reached an Agreement over Brexit. Knowledge of this was attained from the actual transcript of the meeting between May and Merkel.
1) The Agreement was couched in a way to ‘appease’ the Brexit voters.
2) The Agreement would enable May to get rid of those people in her party who were against progress and unity in the EU.
3) Both Merkel and May agreed that the likely course of events would be that UK would re-join the EU in full at some time after the next general election.
4) May agreed to keep as many EU laws and institutions as she could despite the current groundswell of ‘anti-EU hysteria’ in Britain (May’s own words, apparently.)
5) Merkel and May agreed that the only realistic future for the UK was within the EU.
The original Agreement draft was completed in May 2018 in Berlin and then sent to the UK Government Cabinet Office marked ‘Secret’.
NB This Agreement draft was authored in the German Chancellor’s private office.
The Cabinet returned the Agreement draft with suggestions, and there was some to-ing and fro-ing during June 5th 2018.
Private calls between the Prime Minister and Chancellor were made.
The Agreement’s final draft came out late in June 2018. The German Chancellor told Prime Minister May that this was a deal she would support, though there would need to be some more small concessions by the UK to keep the EU happy.
The Chancellor and Prime Minister met in Germany. Merkel had this meeting recorded as a ‘private meeting’ though the Prime Minister was probably unaware of that.
The Chancellor had the transcript of that meeting circulated secretly to EU and key German embassies.
Conclusions
Documents make it quite clear that Prime Minister May was negotiating with Germany, not the EU.
The transcript also makes it clear that the Prime Minister intended to keep all this secret from minsters, especially the Brexit group.
She wants to keep as many EU institutions in UK as intact as possible in order to facilitate an easy return to the EU after 2020.
Chancellor Merkel briefed May on tactics to force Cabinet approval.
The Prime Minister and senior civil servants were working with Germany to stop Brexit or water it down to prevent free trade and the ending of freedom of movement, but to keep cash flowing to the EU.
David Davis was kept in the dark while key EU premiers in France, Holland and Ireland were briefed in full.
Key EU heads were actually briefed in full the day before the Cabinet meeting at Chequers.

By Political Correspondent For The Daily Mail

Theresa May last night faced claims she shared her Brexit plan with Angela Merkel before revealing it to her Cabinet at Chequers.

The Prime Minister is alleged to have blocked a suggested change from one of her ministers during the away day because it had already been approved by the German Chancellor.

In an article for the Spectator, journalist Charles Moore wrote: ‘At Chequers, I hear, one of her responses to suggested changes in her blueprint was to say, ‘No, that’s not possible, because I’ve already cleared it [the existing text] with Mrs Merkel’.’ 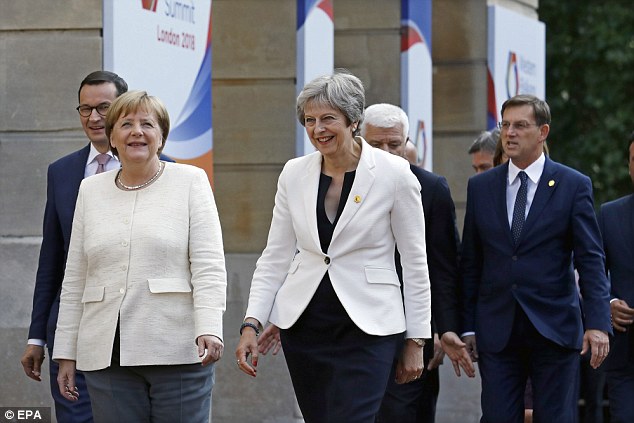 The Prime Minister flew to Berlin last Thursday, on the eve of her Chequers summit, to hold a meeting with Mrs Merkel. Last night Downing Street declined to comment.

Mrs May today publishes her long-awaited Brexit White Paper setting out the full details of the Chequers agreement.

In the foreword to the 120-page document, new Brexit Secretary Dominic Raab will say it is ‘a vision that respects the result of the referendum and delivers a principled and practical Brexit’. 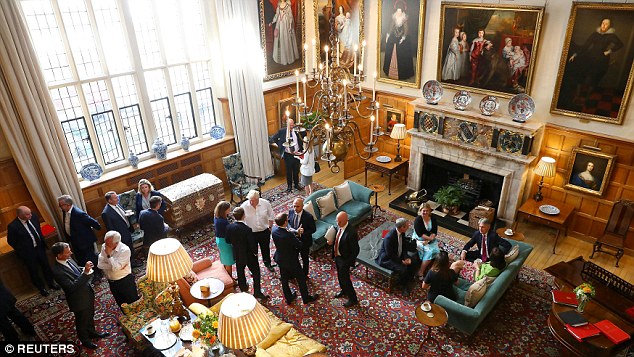 The Prime Minister flew to Berlin last Thursday, on the eve of her Chequers summit, to hold a meeting with Mrs Merkel. Last night Downing Street declined to comment

Tory MPs yesterday said the Chequers Brexit plan looked like a Cabinet ‘sellout’ and ‘capitulation’ to the European Union, and suggested the plan was a ploy to keep the UK in the customs union.

Julia Lopez questioned whether the ‘common rule book’ described in the Chequers plan was an ‘honest term’. The Tory MP suggested the EU would hold more sway and would be tempted to introduce measures that would be harmful to the UK.

‘Do you not think it would be more honest to call it an EU rule book that the UK applies?’ she asked.