An emergency for the Leave campaign 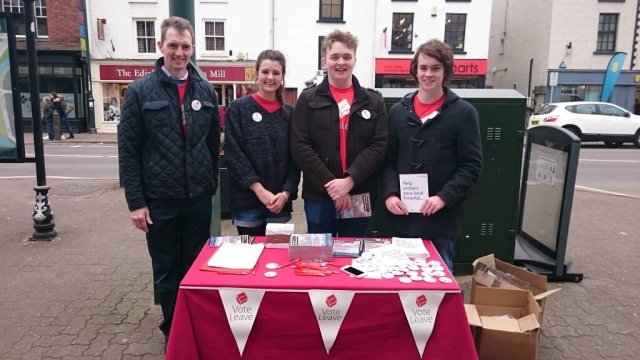 As things stand, it is widely assumed that Vote Leave Ltd will win the lead campaign designation on account of it having the physical infrastructure to mount a campaign. On face value that would appear to be the most obvious choice. From what I hear, Grassroots Out lacks any organisational ability and many of their local events have been flops.

There is also reason to doubt they have the backing they claim. They repeatedly claim “We have 750k registered (name and address) supporters, 10k members who have paid £30 and 600k followers on social media. 7 political parties, 3 of the largest unions, over 3000 councillors from all parties – 1500 businesses and counting.”

The problem the Electoral Commission will have is establishing whether or not this is a true representation of support given their known propensity to lie, often claiming the support of organisations without their consent. We also know that much of their social media support is bogus having paid substantial sums to massage the numbers upwards.

This could prove damaging for all concerned should certain parties come forth with evidence that they are faking their support. Given how many bridges they have burned I see that as entirely likely which will prove an embarrassment for them and the Leave cause in general. Legal challenges are always ill-advised and will come over as petulance from a sore loser in this case.

It’s not an enviable deliberation for the Electoral Commission in that it is unlikely Vote Leave will enjoy the backing of Ukip. Any organisation that does not have their backing may be perceived as lacking legitimacy. But then Grassroots Out is widely perceived to be Ukip by another name. The only reason it enjoys the support of various MPs is because of the toxic inner politics of Vote Leave, headed by the odious Dominic Cummings and Matthew Elliott, both of whom are entirely exclusive and dictatorial in their approach.

And so it’s a lose-lose proposition for Leavers. On the one hand we have a kipperish organisation in bed with Breitbart – which is barley managing to conceal its unhinged hatred of Muslims, and on the other hand we have Vote Leave who propose unilateral withdrawal from both the EU and the single market under the assumption a bespoke trade deal can be knocked up without reference to the EU’s own needs and demands. In diplomatic terms that amounts to a hostile act.

Worse still their campaign strategy is to bleat about saving the NHS, claiming we can spend what we save on the NHS. As if that were no bad enough, their efforts will be fronted by Boris Johnson – a disreputable, discredited flip-flopper whose own arguments vary from day to day – and not even consistent with official Vote Leave material.

All the while, neither operation presents a coherent and credible Brexit plan and thus we will still be seeing broad speculation as to what out looks like the night before the vote. We are told by Andy Wigmore of Leave.EU (Grassroots Out) that they have employed some “serious economists and business people and Deloittes” to create one of their own. “it’s a market solution – not something we will publish this side of designation.”

This is in the same breath as claiming they have been denied permission to use Flexcit, which is an outright lie given that they were sent a tailored edition on request, even carrying the Leave.EU logo on the understanding that it would be adopted. As to whether they will produce a plan of their own, I have had sufficient dealings with Wigmore to know when he is lying. ie all the time.

In any case, presenting a credible plan before designation could well be their ace in the hole given how demonstrably suicidal the Vote Leave proposition is, but then since Wigmore ispushing the Commonwealth as an option, that suggests they are nowhere close to having a plan or understanding the necessity for having one. As usual we see the usual euphonics designed to appease critics – but spoken with forked tongue. At every test of sincerity, that outfit retreats to the comfort zone of kipperism.

Meanwhile the entire campaign has fallen flat on both sides, with each side having fired most of their ammunition to no real effect, failing to energise a campaign broadly perceived to be the fallout of a civil war on the right. The fight has gone into sleep mode.

In the final stretch it will be akin with a D-Day landing with no fire support or air cover, sending the troops straight into the guns with only peashooters – believing that having a widespread generic moan about the EU is key to victory. It’s not looking good. If we win, it will be entirely through the actions of independent campaigners, rather than the monolithic dodos applying for designation.