Tories Must End Their Affair With Boris As MUST Leave_The_EU supporters

sorry I can’t provide a more ergonomically readable version of Matthew Parris’ excellent article, but you can enlarge to suit.

Unfortunately Matthew Parris writes behind a paywall & I stopped buying the paper when it set up its paywall! 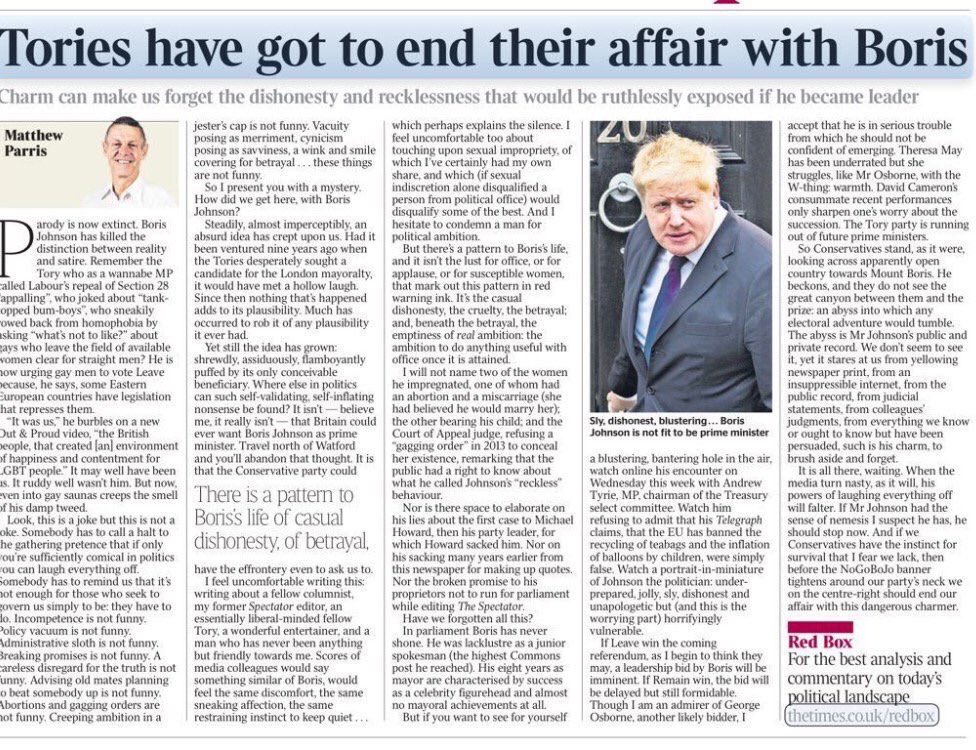 Now The Telegraph is setting up an online version where comments are barred. No doubt it will soon drop any pretence at being a serious paper and admit it is nothing more than a vehicle to sell holidays, travel & books.

In line with other failed newspapers The Indipendent has now ended and gone to online only, which is hardly surprising as its layout made it unreadable for fashion sake and its articles were cloyingly unreadable as they pandered to Political Correctness and anti British journalism – as of course does The Guardian and as it has for many years as its backers lost £Millions a year and its circulation figures steadily fell, dependent on a free distribution to some groups, little wonder it has laid off many of its better journalists and is left with smug self satisfied scoundrels like Polly Toynbee & Owen Jones with their twisted opinions competing with the odious Alibi Brown and the like!

It is worthy of note that the media in some quarters does at least admit to its guilt in creating the lies of politics and the liars who promote them, it seemingly makes for just the sort of shoddy lazy but colourfull journalism that Boris Johnson is accused of!