IN MEMORIAM: Addressing the tragic and cowardly murder of Jo Cox MP:

IN MEMORIAM: Addressing the tragic and cowardly murder of Jo Cox MP: 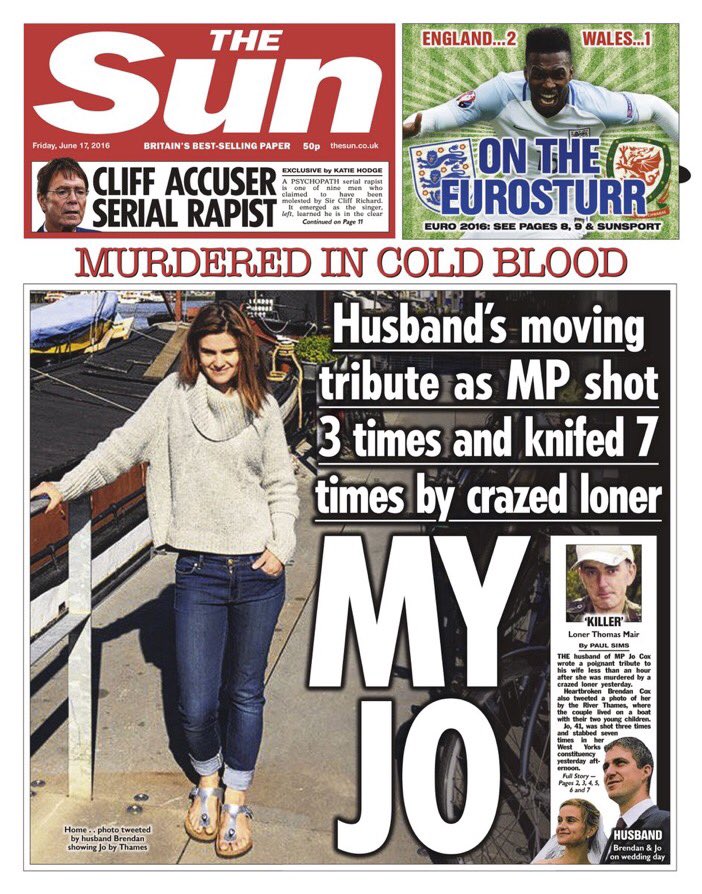 It is unfortunate that some have seen fit to conflate the cowardly murder of Jo Cox MP, by a mentally deranged member of the public (male, Caucasian and apparently indigenous), with politics – there is absolutely no evidence to support this at this time, we understand.

There are mentally disturbed individuals alligned with all parties and none – they are an omni present fact of life in any society, from whom it is almost impossible to protect members of the society be they soldiers, priests, police or even MPs!

To not stand in her seat at the bye election is politicising her murder, as clearly it would seem not to have been a political assassination, unlike the cowardly IRA killings of Airey Neave, Edgar Graham Sir Anthony Berry, Robert Bradford or Ian Gow since the end of WWII in 1945. The reason for an unopposed bye election in the case of assassination is clear but there is no case for the same in any other cause of death.

There is also no justification for either suspension of political campaigning nor for the stance of many in the media and the body politic to try to politicise this tragedy.

Jo Cox was a mother, a wife, a daughter and to many a friend – her work to date, whether one agrees with all her statements or not, her efforts were exemplary and first and fortemost we have all lost a bright star, particularly her family, her friends, those causes she espoused and Parliament where such stars are much needed on all benches.

Let us all hope that her memory is not demeaned by reducing her to being of great influence in the outcome of the EU-Referendum, as from reading of her, she would have been appauled at such an outcome and dishonest exploitation for personal political gain – whoever it was by.

She and her husband confronted the risks of public life wittingly and the great tragedy is that of her children and society at large, my thoughts are with all for their loss.

Fortunately in Britain murder is relatively uncommon and murder of our elected representatives exeedingly rare, the last having been in 1990 – long may that continue, out of respect for those who have been the tragic victims of those few occasions, whether directly or indirectly.

What a waste of a bright and vibrant life!

HOWEVER Let us not forget that even in the efforts of Remainers & the Labour Party there are dark clouds hovering over their apparent efforts to achieve Jo Cox’s beatification:

By Simon Walters, Political Editor For The Mail On Sunday

Charity scandal: Chief strategist for Save The Children, Brendan Cox, denied allegations against him but left the organisation in September

Another children’s charity was rocked last night after a senior executive at Save The Children resigned over allegations of ‘inappropriate behaviour’.

Mr Cox, Save The Children’s director of policy and advocacy, left in September after complaints against him by women members of staff. A well-placed source said Mr Cox strenuously denied any wrongdoing but agreed to leave his post.

The source denied Mr Forsyth had quit due to the dispute involving Mr Cox – but said it had ‘hurt him’. The charity investigated claims that Mr Forsyth failed to act firmly against Mr Cox but found no evidence to support the charge, the source added.

An insider said: ‘Some people were unhappy there was no proper internal investigation into the allegations. Brendan packed his bags and left suddenly.’

One individual who has worked with Save The Children said: ‘Several of the women complained about inappropriate behaviour by Brendan. When the charity did nothing about it they threatened to make a huge fuss. Shortly afterwards it was announced that Brendan was leaving. Then we heard Justin was going as well.’

In a resignation letter to staff, Mr Forsyth said he was leaving after having discussed the matter with charity chairman, Sir Alan Parker, head of public relations giant Brunswick.

Mr Forsyth said he did not yet have a new job to go to, adding: ‘I hope to take a short breather before undertaking the next step of my career.

‘I have a few exciting irons in the fire that are too early to talk about.’

The arrival of ambitious Mr Forsyth and Mr Cox, both fervent Labour supporters, at Save The Children after Mr Brown lost the 2010 Election led to a major change in the charity.

Mr Forsyth was branded one of a new breed of charity ‘fat cats’ with a £160,000 salary, expenses of £3,000 a year and £11,000 for his pension pot. Backed by Mr Cox, Mr Forsyth ordered a highly emotive multi-million pound TV advertising blitz. The ‘It Shouldn’t Happen Here’ campaign claimed 1.6 million British children were growing up in ‘severe poverty’. Tory MPs said it was a ‘crude political campaign against Government cuts.’

Asked about the allegations from female staff of inappropriate behaviour by him, Mr Cox said last night: ‘These rumours are untrue.’

When this newspaper asked the charity last month about Mr Cox’s departure, a spokeswoman said: ‘We never comment in any circumstances on individual members of staff past or present.’

Neither Mr Forsyth nor the charity were available for comment yesterday.