here is a brief summary of why the SNP position could lead to duping the peoples of Scotland into a suicidal vote . They could be foolish enough to be beguiled by the blandishments of Nicola Sturgeon and the false hopes and flatery offered by Guy Verhostadt.

The SNP’s Brexit claims are bogus

Three months since the referendum, Project Fear’s economic warnings have already proven false. But none are more bogus than those of Remain’s most recalcitrant rearguard: the SNP. 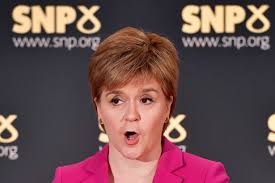 Nicola Sturgeon makes out that, compared to the rest of the UK, Scotland’s economy will be particularly badly hit by Brexit.

But what’s the basis for this idea?

As Moneyweek‘s Matthew Lynn writes, the numbers don’t support the SNP’s case. Because, compared to the UK as a whole, Scotland does a much lower proportion of its trade with the European single market.

Excluding oil and gas, Scotland’s exports to the EU are worth £11.6 billion per year, compared to £15.2 billion for those to the rest of the world, and £48 billion to the rest of the UK. So, if Scotland left the UK post-Brexit, just 18% of its total exports would go to the EU.

Moreover, its exports to the EU fell by 16% last year – the fastest of any of the four nations in the UK.

Plus, businesses in Scotland already use much less cheap EU labour than those elsewhere in the UK. Just 7% of Scotland’s workers are born abroad, compared to 13% for the country as a whole.

Then there are the opportunities. New free-trade deals could, for example, cut massive tariffs on exports of Scotch to developing countries, like India.

The SNP’s goal of an independent Scotland is fundamentally political, not economic – as Nicola Sturgeon admits. What political union Scotland should be part of is up to the Scottish people. But it’s got nothing to do with the economics of Brexit.

To view the original of this MP’s article CLICK HERE

With an avg. 1.2M voters per MEP & Britain having only 8%, if united, say. The EUropean Parliament has no ability to make policy and has a Commission of unelected bureaucrats, thus clearly the EU is not even a pretence of being a democracy; yet it is willing to slaughter people in Sovereign States to impose democracy on them!

The imposition of a Government and policies upon its vassal regions such as the peoples of Greece shows just how far from being a democracy the EU is.There will be little or no change in Britain’s economic position, when we leave the EU and by then being a part of the Eropean Economic Area all will benefit, as we secure trade relations with the EU vassal regions and can trade and negotiate independently on a global stage.
One huge benefit will be that we can negotiate with bodies like the WTO, UN, WHO, IMF, CODEX and the like, directly in our own interest and that of our partners around the world in both the Commonwealth and the Anglosphere at large; rather than having negotiations and term imposed by unelected EU bureacrats.
The greatest change and benefit will be political, as we improve our democracy and self determination, with the ability to deselect and elect our own Government, which with an improved Westminster structure, see >Harrogate Agenda<.
How we go about the process of disentangling our future well being from the EU is laid out in extensive, well researched and immensly tedious detail see >FleXcit< or for a brief video summary CLICK HERE

Data & The Study of a Wind Turbine Application: CLICK HERE

A Concept of Governance Worthy of Developement: CLICK HERE