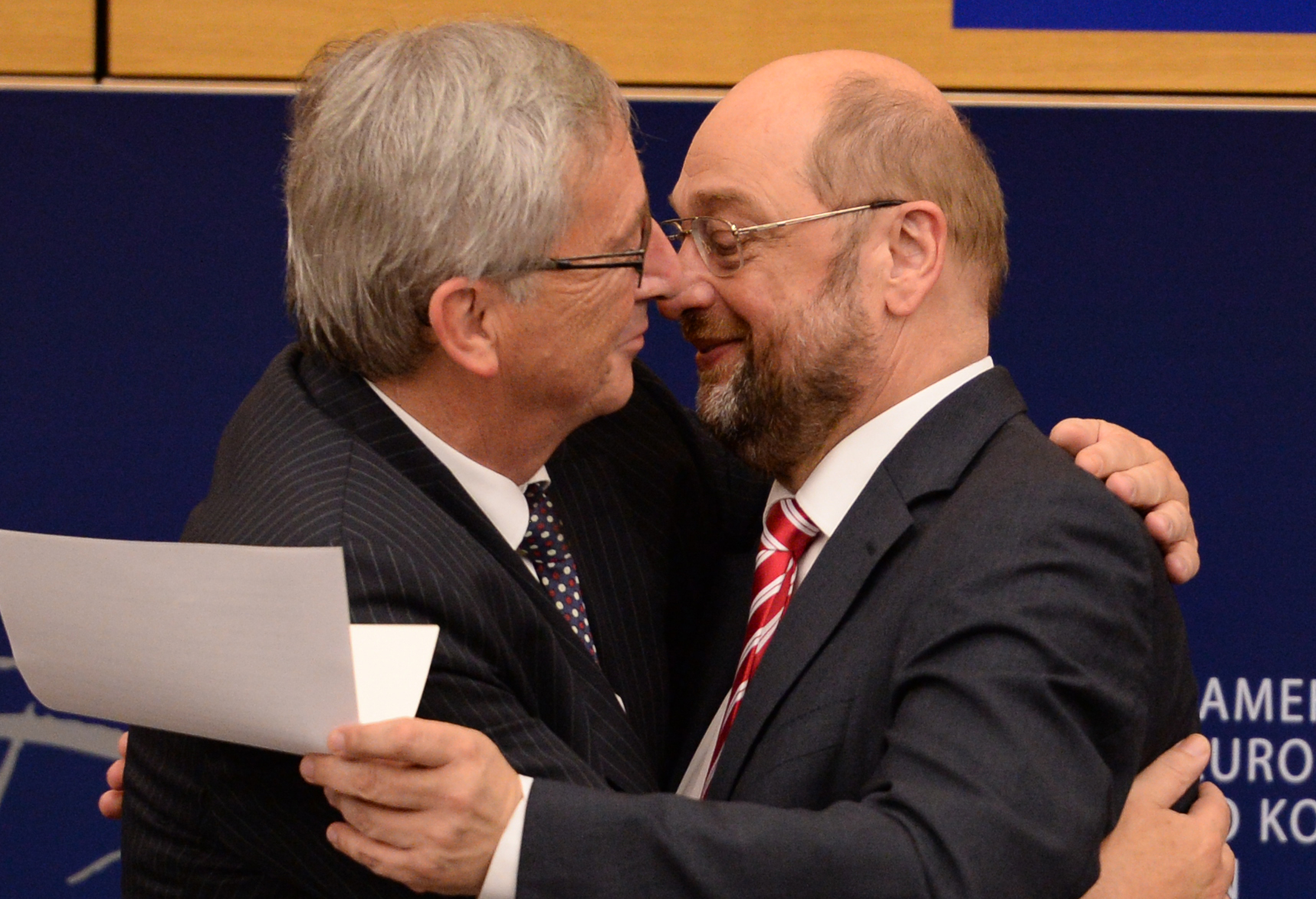 Jean-Claude Juncker and Martin Schulz, respectively European Commission and Parliament Presidents, have been repeatedly telling anyone who cares to listen that they alone can save Europe from the problems it currently faces. A damning article in German weekly Der Spiegel, however, concludes the very opposite: Juncker and Schulz are the epitome of the self-serving elite at the very heart of the EU’s  “exisistential crisis”.

Only a few months ago, Juncker and Schulz gave a long and rambling self-congratulary interview to the same newspaper in which they claimed hubristically to be a “proven team” that should not be changed. As both leaders have continued to fight viciously to preserve their posts and priveleges in the face of mounting criticism of how the EU has handled a series of crises, Der Spiegel has concluded that the driving force behind this dastardly duo is not “saving Europe” but very crudely saving their own jobs.

Junker and Schulz never miss an opportunity to bang on about how Europe is in danger from “right wing populists”, blithely turning a deaf ear to any of the issues raised by leaders such as Marine LePen, Geert Wilders, Nigel Farage or Victor Orban on behalf of their considerable electorates. In Schulz’ case he even claims to be proud of criticisms from this part of the political spectrum, as he tramples under foot their rights in the Parliament to which they were democratically elected.

Things came to a head after the UK vote to leave the EU when Juncker and Schulz reacted by calling for more and faster European integration, completely ignoring the repeated concerns of the European citizes they claim to represent, and singularly failing to recognise the role that the elite EU institutions played the referendum result they so deeply regretted. At that time there were tentative calls from some government figures in Poland, Hungary and some other newer Member States for Junker to accept his share of the responsibility and resign.

Juncker was not in listening mode, and Schulz rushed to his defence. But the tide is now turning and Schulz is soon to be unceremoniously dumped from his perch at the European Parliament as more and more backbench MEPs decided they had enough of his dictatorial way of running their House. His socialist mandate ends in January 2017 and the conservative EPP group – who actually got Juncker where he is in the first place as their ‘Spitzenkandidat’ in the 2014 European Elections – are reclaiming the Parliament presidency.

Schulz has therefore turned his attentions to securing the best job he can get his hands on within the German national political scene. It seems he is even ready to cast the European Parliament aside before the end of his mandate in his desperate scramble to hang on to power at all costs.

In his Spiegel interview last summer, he claimed: “I have never been in a situation when companions have abandoned me. But I am certain that, were it to come to that, Jean-Claude would be there.” Now that his companions in the Parliament have abandoned him, the question arises as to whether, without his buddy Martin to protect him and cover up his scandals, Jean-Claude will be far behind.

If the EU institutions can manage to shake off the dark shadow of the Juncker/Schulz domination of the past two years, then perhaps there can be hope for some real real reform of the EU, grown so distant from the day-to-day concerns of its citizens.

Data & The Study of a Wind Turbine Application: CLICK HERE

A Concept of Governance Worthy of Developement: CLICK HERE

With an avg. 1.2M voters per MEP & Britain having only 8%, if united, say. The EUropean Parliament has no ability to make policy and has a Commission of unelected bureaucrats, thus clearly the EU is not even a pretence of being a democracy; yet it is willing to slaughter people in Sovereign States to impose democracy on them!
The imposition of a Government and policies upon its vassal regions such as the peoples of Greece shows just how far from being a democracy the EU is.There will be little or no change in Britain’s economic position, when we leave the EU and by then being a part of the Eropean Economic Area all will benefit, as we secure trade relations with the EU vassal regions and can trade and negotiate independently on a global stage.
One huge benefit will be that we can negotiate with bodies like the WTO, UN, WHO, IMF, CODEX and the like, directly in our own interest and that of our partners around the world in both the Commonwealth and the Anglosphere at large; rather than having negotiations and term imposed by unelected EU bureacrats.
The greatest change and benefit will be political, as we improve our democracy and self determination, with the ability to deselect and elect our own Government, which with an improved Westminster structure, see >Harrogate Agenda<.
How we go about the process of disentangling our future well being from the EU is laid out in extensive, well researched and immensly tedious detail see >FleXcit< or for a brief video summary CLICK HERE
NB: