BORIS Johnson has laid out his four red lines for Brexit, insisting the  transition period must last “not a second more” than two years.

All his demands  go further than the agreed Cabinet position, hammered out after a summer of infighting.

The Foreign Secretary also used a pre-Tory conference interview with The Sun to reflect Leave voters’ anger over the transition period during which the UK will still be governed by all  the EU’s rules.

But his fresh Brexit intervention will anger Theresa May and risks reopening the  feud among her senior ministers.

The PM used her speech in Florence last week to call for a changeover period from March 2019  to break the Brexit talks’ deadlock and win businesses time to adapt. There is no Cabinet agreement  on  how long it should last, with Mrs May  suggesting “around two years”.

But Boris last night said anything longer than 24 months — effectively to March 30, 2021 — would be a mistake that would leave Brexit voters feeling betrayed.

Talking to The Sun in his vast  room in the Foreign Office, overlooking St James’s Park, the 53-year-old Tory big beast said: “I got that from my own talking to people. Very strongly.

“What that teaches me is that  really is it. Rien ne va plus. Finito la musica. Then we come out. There can be no monkeying around. 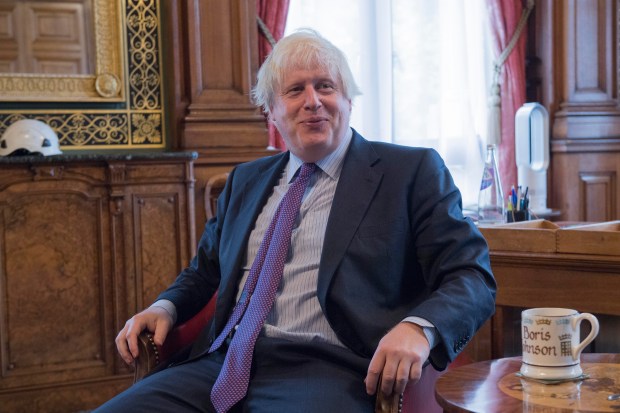 1) The transition period post-Brexit must be a maximum of 2yrs.. and not a second more.

2) UK must refuse to accept new EU or ECJ  rulings during transition.

3) No payments for single market access when  transition ends.

4) UK must not agree to shadow EU rules to gain access to market.

“Am I impatient about it, do I want to get it done as fast as possible? Yes, absolutely. Do I want the delay to go on longer than two years? Not a second more.”

Quizzed on whether a status quo transition meant agreeing to new Brussels diktats, BoJo argued: “You heard the Prime Minister say very clearly in Florence that she envisages the transition period being run under existing arrangements — that was the phrase she used, ‘The existing rules’.”

Boris explained: “What I have always said is that we will pay  for things that are reasonable, scientific programmes.

“But when it comes to paying for access to the market, that won’t happen any more than we would expect them to pay us for access to our market.”

Brexit is going to be great. Ain’t no stopping us now!

Net giants must be punished

TECH giants such as YouTube and Amazon that help spread terror need to be punished, Boris has insisted.

The Foreign Secretary called the internet giants’ free speech defence for not taking down extremist content an excuse to make more money.

“They are facilitating terror. It is unbelievable. They need to be punished.”

His outburst backs Theresa May’s global push to clamp down on the California-based internet giants.

They have ignored dem-ands to do more to stop terrorists using their sites.

It comes after an investigation by The Sun last week revealed Amazon is selling the parts required to build a nail bomb, and without proper security checks.

BoJo insisted: “There is no point in coming out of the EU and then remaining in  rotational orbit around it. That is the worst of both worlds. You have  to be able to have control of your regulatory framework.”

He conceded that a transition was  also necessary for the Government, as some departments may not be ready to deal with Brexit on March 30, 2019, the day the UK formally leaves the EU.

He admitted: “I am afraid the truth is that there are government departments that, at the current rate of fire, are going to need to get ready.”

STUDENT debt must be “addressed” by a Tory party which won only 26 per cent of under-40s’ votes at the election, warns Boris.

The Foreign Secretary, whose brother Jo is the Universities Minister, said: “The question is, how do you help young people to manage their debts? We have to address that, and we will.”

Students in England now graduate with average debts of more than £50,000 after interest rates on loans were hiked to 6.1 per cent.

While the Tories bombed with under-40s, more than 60 per cent of younger voters backed Labour’s pledge to scrap tuition fees.

Theresa May is expected to announce action at their conference next week.

She said last night: “The next generation should always have it better than the last.”

But by laying down fresh demands, Boris will again be seen as establishing himself as the defender of the true Brexit faith.

It emerged yesterday that he was the top choice among Conservative  members to succeed Theresa May.

A YouGov poll  of activists showed he was back in favour after being seen  to challenge Mrs May’s authority, with  his  4,300-word article laying out his  Brexit vision.

But BoJo insisted it was not a pitch for party leadership, saying  speculation about his intentions had been “massively” overdone.

Instead, he issued a slapdown to Brexit doubters, saying: “The crucial thing I want to get over to Sun readers about Brexit is that it is going to be great and we need to believe in ourselves and believe we can do it. It is unstoppable. Ain’t no stopping us now.

“There is a disjuncture between the debate in Westminster and the London bubble and where a lot of people are in the country.

“Most people can’t understand what this conversation is all about. We left. We voted for that last year — so let’s get on with it.”

But last night Ruth Davidson blasted Boris for being too positive about Brexit.

And in a dig at her Westminster colleagues, the Scots Tory boss said it was time “serious people” took charge of exit talks.